Please visit the DHS Track and Field website for the latest information and updates regarding Track.
http://decaturtrackandfield.weebly.com/ 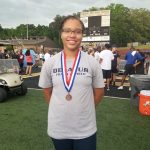 Varsity/JV/Middle School Track · May 14 Bulldog Finishes 3rd in State; Others Do Well in State Track Meet

Bulldog Layla Senter brought home some hardware from the State Track Meet.  Layla finished 3rd in the shot put and 5th in the discus!  Eoin McNally finished 6th in the 800 meter race.  Christian Gonzalez finished 9th in the 3200 after having his heel clipped by another runner.  Congratulations to these Bulldog athletes! 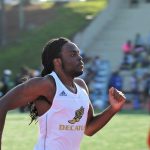 The Sectional Track Meet was held Saturday, May 4th and the Bulldogs had 5 athletes competing.  Sam Amick, Christian Gonzalez, Eoin McNally, Layla Senter and Adi Taylor all participated.  Sam Amick finished 9th in the 3200 and Adi Taylor finished 12th in the 1600.  Both had stellar seasons but they did not qualify for State.

No Events This Week

Events are added by athletic staff.
View All Events